Season the pork with the 2 teaspoons of salt and 1 teaspoon of pepper. Heat a large cast-iron casserole over moderately high heat. Add the pork, fat side down, and add 1/2 cup of water. Cook until all  of the water has evaporated, about 5 minutes. Continue to cook over moderate heat until the pork is golden brown, about 8 minutes. Flip the pork and cook, turning occasionally, until browned all over, about 5 minutes longer.

Add the onion and garlic to the casserole and cook, stirring occasionally, until lightly golden, about 5 minutes. Add the stock, wine and parsley and thyme sprigs and bring to a simmer. Cover and cook over low heat, turning once, until the pork is just tender, 2 1/2 hours. Add the sweet potatoes and chestnuts, cover and cook until the pork and sweet potatoes are very tender, 30 minutes.

Transfer the pork to a cutting board and let rest for 10 minutes. Using a slotted spoon, transfer the sweet potatoes and chestnuts to a platter. Strain the jus into a bowl and degrease with a spoon; season with salt and pepper.

Slice the pork and arrange it on top of the vegetables. Garnish with parsley and serve with the jus.

Make Ahead The braised pork can be refrigerated overnight and reheated before serving.

Medium-bodied Côtes du Rhône is rich enough to go with this pork and has enough fruit to go with sweet potatoes.

Pounding slices of pork tenderizes the meat, making it thin enough to take on the flavor of the marinade and allowing it to cook fast enough to stay moist. 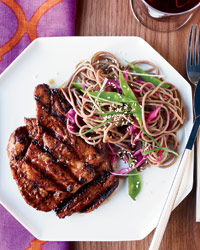 Put the fermented black beans in a bowl and cover with water. Let stand for 15 minutes. Drain and coarsely chop the beans.

In a food processor, combine the black beans, garlic and ginger and pulse until finely chopped. Add the chile paste, vinegar, soy sauce, sesame oil and sugar and blend well.

Light a grill or preheat a grill pan. Remove the pork from the marinade, leaving just a thin coating on the meat. Brush the pork with oil and grill over moderate heat, turning every 2 minutes, until nicely charred and cooked through, about 6 minutes.

Chinese fermented black beans and gochujang are available at Asian markets and from amazon.com. Or substitute an equal amount of Chinese black bean sauce or any kind of Asian chile paste.

Tannins in red wine can intensify the heat in chiles, so for this dish, look for a fruit-forward Grenache-based wine.

I got this from a chef in my neighborhood. I’ve tried it and OMG!! This is sooo rich and amazing.  What chef does the day after (if there is any left) he makes sliders. So…if you try this on Friday night…how about some sliders for the weekend football game?  Hmmmm.  Enjoy! 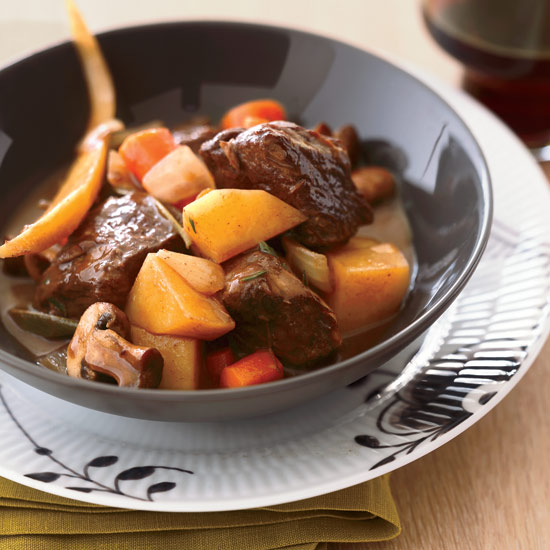 In a large bowl, toss the short ribs with the flour. In a large enameled cast-iron casserole, heat the oil. Working in batches, cook the short ribs over moderately high heat until browned all over, about 6 minutes per batch. Discard the oil.

Return the meat and any juices to the casserole. Add the wine and boil until reduced by half, 8 minutes. Add the stock and bring to a simmer. Cover and cook over low heat until the meat is tender, 2 hours.

Skim any fat from the stew. Stir in the carrots, potatoes, parsnips, onion, mushrooms, thyme and sage. Cover and simmer over low heat until the vegetables are tender, about 35 minutes. Season with salt and pepper and serve.

I have a love/hate relationship with Valentine’s Day.  I mean, I appreciate the thought of the day, but I hate that on this day, men (ok, and some women) make themselves crazy on what “thing” to buy to show their partner how much they love them. COME ON…one day to show love?? What happened to the other 363 days of the year? My relationship now is at the place where I want to exhibit love with someone who loves me….as well as likes me. That makes my heart sing and better than any gift that can be bought.   So create these cakes not just on Valentine’s day but any day.
Happy Valentine’s Day honey….
Lava Cakes
4 ounces bittersweet chocolate, chopped
1/4 cup unsalted butter
3 tablespoons all-purpose flour
1/4 teaspoon kosher salt
3 large eggs
1/3 cup granulated sugar
1 teaspoon vanilla extract
1-2 teaspoons red food coloring (I really like the gel colors)
coconut whipped cream, whipped cream or ice cream, for serving (optional)
Ganache
4 1/2 ounces (about 3/4 cup) semi-sweet chocolate chips
1/2 cup canned coconut milk or heavy cream
1/2 tablespoon vanilla extract

Most of all, spend it with someone you love…Hopefully they love you as much back!

This classic Belgian beef stew is known for its sweet-sour combination of caramelized onions and beer. Any dark Belgian-style ale would be a good choice here. As with most stews, the dish will taste even better a day or two after it’s made. 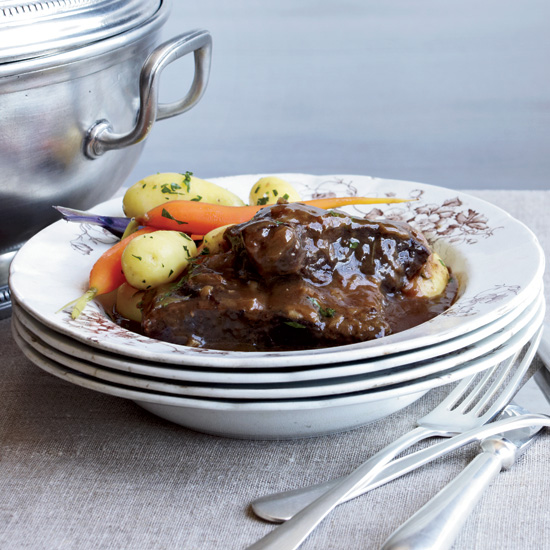 Boiled carrots and potatoes, for serving

In an enameled cast-iron casserole, melt 2 tablespoons of the butter. Season the beef with salt and pepper and add one-third of it to the casserole. Cook over moderate heat until lightly browned, 3 minutes per side. Transfer to a bowl. Repeat with 2 more batches of meat, using the remaining 2 tablespoons of butter.

Add the onions to the casserole, cover and cook over low heat, stirring, until browned, 8 minutes. Stir in the flour until the onions are well-coated, then slowly add the beer. Return the meat to the casserole along with any accumulated juices. Add the thyme and bay leaves, cover and simmer over low heat, stirring, until the beef is tender, 2 hours.

Uncover and transfer the meat to a bowl. Simmer the sauce over moderate heat until thickened slightly. Discard the bay leaves. Return the meat to the casserole and season with salt and pepper. Sprinkle with parsley and serve with boiled carrots and potatoes.

Make Ahead The carbonnade can be refrigerated for up to 3 days. Reheat gently.

This stew is so hearty that it can handle a very tannic red like Cabernet Sauvignon.

Today, let’s get away from all the “meat” and go for something a bit lighter. This sausage and Broccoli Rabe with Polenta is just as filling and another brunch option for those guests that happen to drop by. You can actually make everything the day before (just re-warm gently before you serve) and make the Polenta that day. Enjoy!

In a large pot of boiling, salted water, cook the broccoli rabe until tender, about 2 minutes. Drain. Rinse with cold water and drain thoroughly. Cut into 2-inch lengths.

In a large frying pan, heat 1 tablespoon of the oil over moderately high heat. Add the sausage and cook, turning, until browned, about 10 minutes. Remove. When cool enough to handle, cut into slices.

Meanwhile, in a medium saucepan, bring the water and the remaining 1 1/4 teaspoons salt to a boil. Add the cornmeal in a slow stream, whisking. Whisk in the remaining 3 tablespoons oil. Reduce the heat and simmer, stirring frequently with a wooden spoon, until very thick, about 20 minutes. Serve with the sauce.

A California Chardonnay will ad a mellow, clean finish to your meal.

I remember having something similar when I was in Marrakesh a few years ago. What a flavorful and hardy meal. I hope you enjoy.

12 cilantro sprigs, tied in a bundle

In a small skillet, toast the saffron over moderately high heat until fragrant, about 10 seconds. Transfer to a small bowl and let cool. Crumble the saffron threads and cover with 2 tablespoons of water.

Add the cilantro, the saffron water and 2 cups of fresh water to the casserole and bring to a simmer. Cover with a round of parchment paper and a lid; simmer, turning the lamb once, until tender, 1 hour.

Preheat the oven to 350°. In a bowl, toss the noodles with the 2 teaspoons of oil. Oil a large steamer insert and set it in a pot. Add enough water to the pot to reach just below the insert; bring to a boil. Add the noodles, cover and steam over moderate heat for 20 minutes, adding more water as necessary.

Meanwhile, in a small bowl, cover the raisins with hot water and let soak until softened, 10 minutes; drain. Spread the almonds on a baking sheet and toast in the oven for 8 minutes, until golden brown. Let cool completely, then finely chop.

Transfer the noodles to the bowl and toss with the raisins and salted water; return to the steamer insert, cover and steam for 20 minutes longer. Pour the noodles into the water in the pot and boil, stirring, until al dente, 2 minutes. Drain. Return the noodles and raisins to the bowl, add the butter and toss to coat. Season with salt.

Reheat the lamb. Spread half of the noodles in a large serving bowl and cover with the lamb stew. Mound the remaining noodles on top, making a well in the center. Fill the well with 3 tablespoons of the confectioners’ sugar. In a bowl, combine the remaining confectioners’ sugar with the almonds and ground cinnamon. Sprinkle the almond mixture over the noodles and serve.